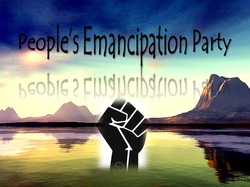 This page outlines the approach, ideology and political platform of The People's Emancipation Party.  A full platform will be added in the following months.  Please feel free to look over the mission and role that the People's Emancipation Party (PEP) utilizes as guiding principles.  Thank you again for your time and engagement in the political process!!
The Guiding Principles of the (PEP)

Ø     We want equity and the freedom to self-determine the present and future circumstances of our disenfranchised communities.

We know that disenfranchised people will not be free to “pursue life liberty and the pursuit of happiness” until we are able to determine our destiny.

Ø    We want living wage and locally based employment for ALL disenfranchised People.  We promote employment that fosters service to others rather than domination and/or exploitation domestically and/or abroad.

Ø    We want the immediate abolishment of the economic exploitation of our communities by wealthy Capitalists (i.e. Golden Sax Bailout scheme & College town Consolidation).

Ø    We want an education system that informs and empowers ALL of the children in our community.

We want education that teaches true History and our role as the United States in the current global context. We believe in an educational system that will give to our people the ability and empowerment to become lifelong learners and one that nurture’s the development of knowledge of self.

If a person does not have knowledge of oneself and one’s position in society and the world, then a person has little chance to relate to anything else.

Ø    At a minimum we want equitable re-distribution/distribution of land, food, housing, education, clothing, justice and peace for our entire community.

*Inspired by the 10-Point Platform established by The Black Panther Party for self-Defense, The principles of the US Green party & the United States “Declaration of Independence”.


The Role/Service of The People's Emancipation Party

The PEP is here to embody empathy, humility, consciousness, sensitivity, selflessness and future-mindedness in an effort to nurture collective responsibility, equitable political representation and to sustain life upon Our biosphere (Planet)…

PEP presently and will continue to acknowledge, listen, represent & support the concerns of traditionally disenfranchised voter’s.  PEP is here to recognize, confront, abolish our current political system and usurp it with a working political system that is engaging, wholly representative, credible, trustworthy and competent.  Thank you for your time and support of the movement...

Political System:   Method of organizing People in an effort to support all People in equity along with the sustainability of ALL life on Our biosphere…

To Be disenfranchised in the United States:  The “category” of People that are defined as disenfranchised/oppressed in this specific case are People who are living in poverty, working class and lower class, African Americans, Latino/a Americans, First Nation Americans (American Indians) and otherwise devalued ethnicities.  The scope also extends beyond race and class to include disenfranchised spirituality and sexualities.

Family: A family is any group of people living in a domestic situation or participating in a healthy relationship consensually defined as family, with another person.